Twenty years from now you will be more disappointed by the things you didn't do than by the ones you did do. So throw off the bowlines, sail away from the safe harbor. Catch the trade winds in your sails.

The Europe of India: Pondicherry (Puducherry)

Pondicherry or Puducherry, is a town tucked away on the Eastern seaboard of India. Among its diverse attractions are, a coastline of 32 kms, palm-fringed beaches, backwaters, fishing villages, beach resorts, the Sri Aurobindo Ashram, the international city of Auroville, the French Boulevard town with its French heritage, and so on. The town offers a unique experience with its mix of modern heritage and spiritual culture. With a predominantly historical background, Pondicherry takes one centuries back in time.

This coastal town was a French colony till 1954 and still retains many colonial buildings, churches, statues and the systematic town planning by the French and is often called the Europe of India because of its town planning.  A remarkable degree of French influence in Pondicherry exists to this date. Pondicherry was designed based on the French (originally Dutch) grid pattern and features neat sectors and perpendicular streets. The town is divided into two sections: the French Quarter (Ville Blanche or 'White town') and the Indian quarter (Ville Noire or 'Black Town'). Many streets still retain their French names, and French style villas are a common sight.

Must visit places in every tourist’s itinerary: 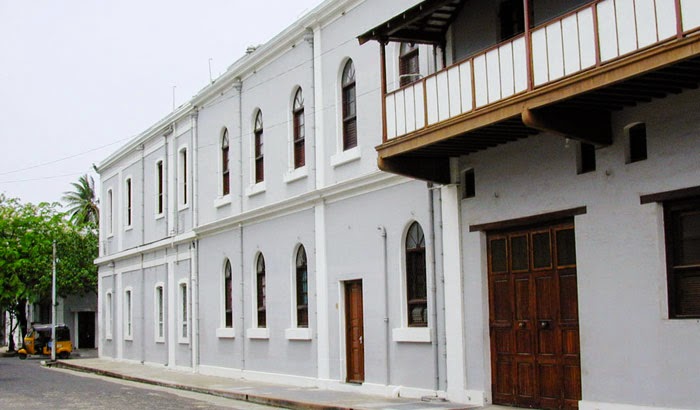 Situated on Rue de al Marine, Sri Aurobindo Ashram is one of the most famous and prosperous ashrams in India. Devotees from all over the world come here for spiritual guidance and salvation. Established by Sri Aurobindo Ghosh in 1926, the spiritual tenets follow a synthesis of modern science and yoga. The main building houses the remains of Sri Aurobindo and Mother Mirra Richard. Their mausoleum is in the central courtyard, under the shade of a frangipani tree. The ashram has facilities for collective meditation and the members run various initiatives like farms, libraries, gardens and several small scale industries. 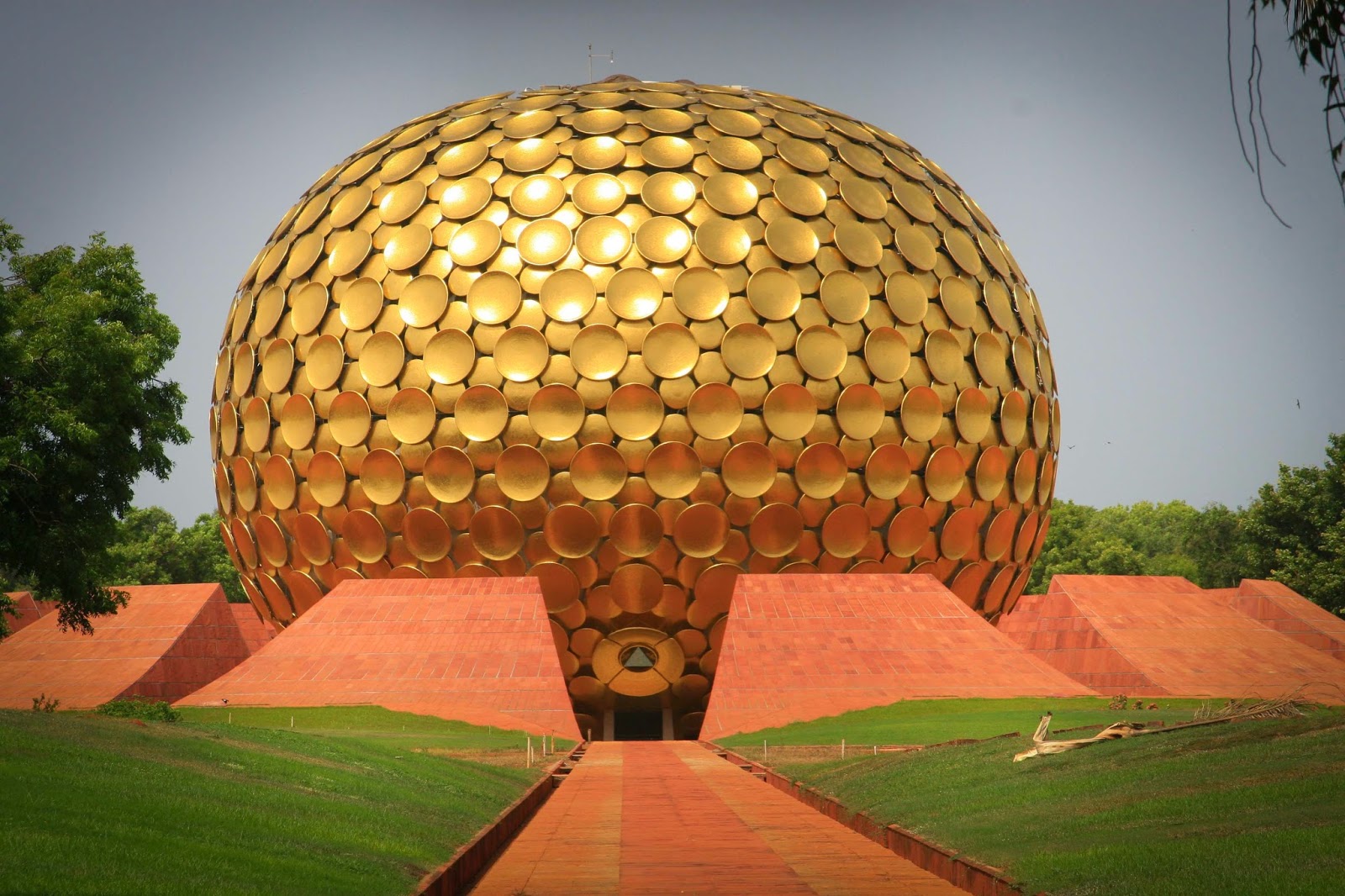 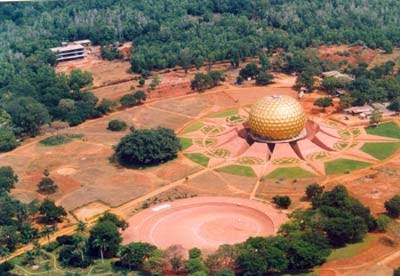 With its name meaning ‘The City of Dawn’ is a township located 8 kilometers from Pondicherry. It was founded in 1968 by Sri Aurobindo and Mira Alfassa and was designed by the French architect Roger Anger. This 30 meter tall building is globe shaped and has a lotus foundation urn. The idea was to create a universal town where people from all over the world would live in harmony and peace irrespective of caste, color, nationalities etc. During the inauguration soil from around 124 was placed in a lotus shaped urn to symbolize the idea behind the establishment of the township. The middle of the town is crowned by a temple which symbolizes the universal mother and is called ‘Matrimandir’. 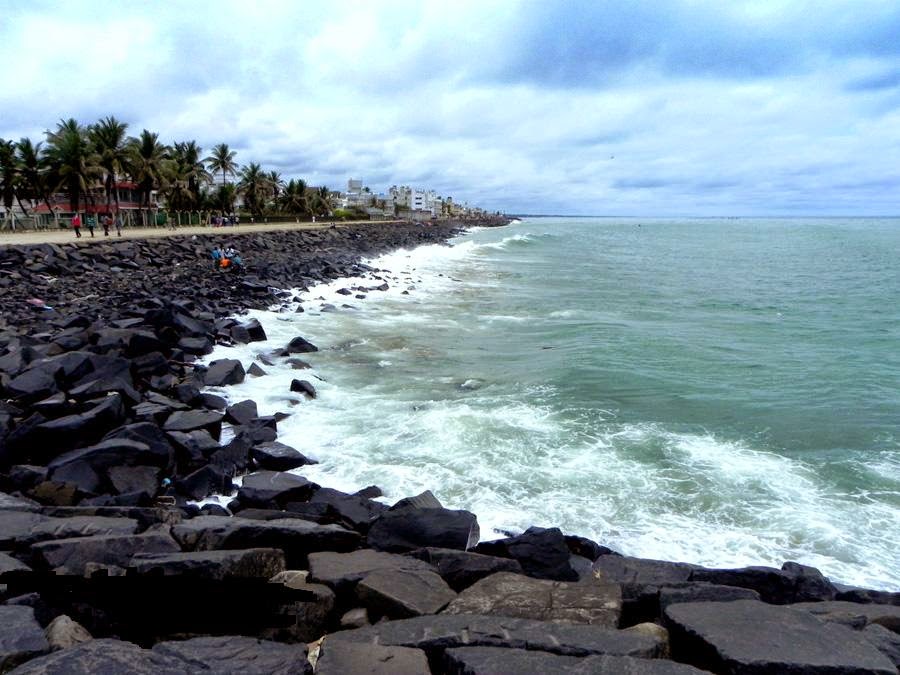 The 1.5 km long promenade running along the beach is the pride of Pondicherry. Promenade beach is one of the main beaches in Puducherry.  Most of the landmarks are on the sea front : the statues of Mahatma Gandhi, Jeanne d’Arc, Dupleix, the elegant War memorial raised by the French, the heritage building “Mairie”, the 27 m tall old lighthouse, the circular shaped customs house & Gandhi Thidal. 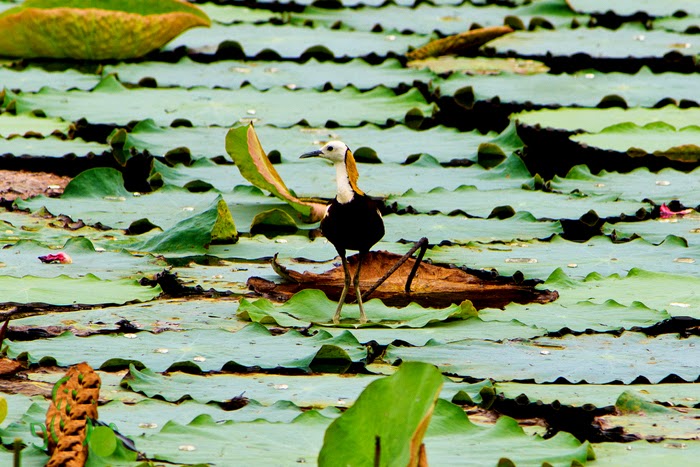 Located on the Pondicherry-Villuppuram road at a distance of 10 kilometers from the town of Pondicherry, the Ousteri Wetland and National Park covers an area of around 3.9 sq kilometers. Geographically the place lies in the territory of both Puducherry and Tamil Nadu. The place is home to a huge variety of aqua-fauna and avi-fauna. The place is frequented by several tourists because of the house boat services offered here. The several unique species of trees and herbs here attract a huge number of migratory birds and has become an important ecological niche in the south Indian region. 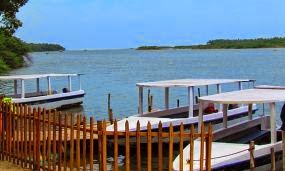 Facilities for boating are available at the Boat House on the River Chunnambar, 8kms from Pondicherry. The backwater and the lush greenery on both sides of Chunnambar provide an ideal setting for boating. 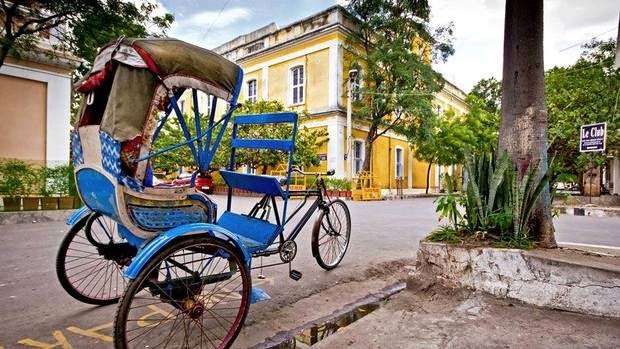 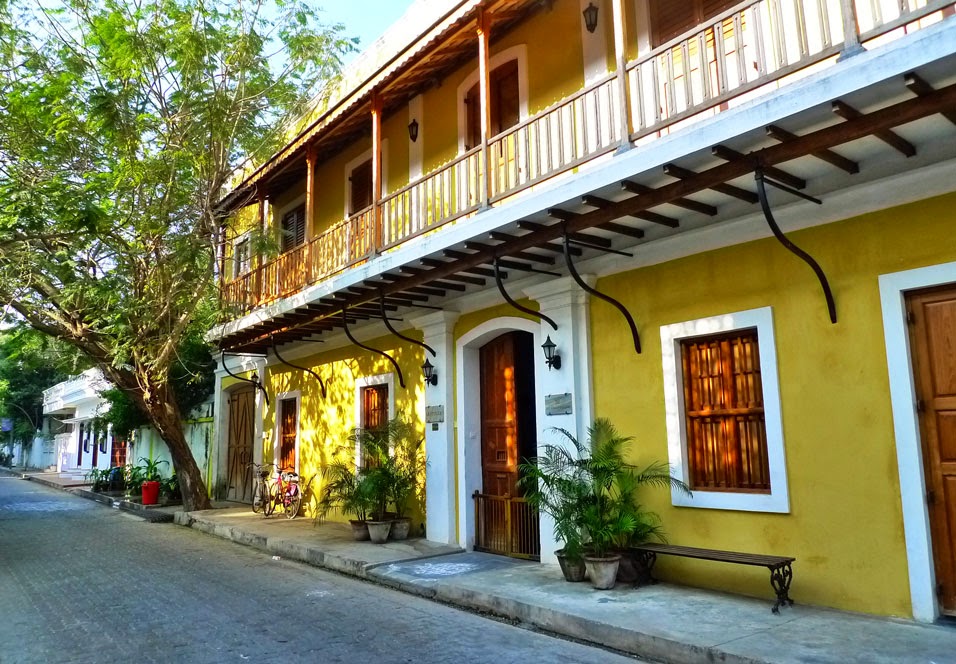 It is beautiful to take up the walk around the boulevard, showcasing three different architectures in 3-4 square kms: The White town or the French square, Tamil Square and the Muslim Square. The guided walk of around 3 hours starts at 7am in the morning. You can also select a time according to your preference. Spend your time exploring the colonial town as you visit the fish market and the vegetable market. The town of Pondicherry is an amalgamation of Tamil and French architecture. The former is mainly found in the west part and the latter in the east. Visit the Indian Square in the Tamil part of Pondicherry on Vaishali Street where you can witness the symbolic tiled roof buildings running continuously from one building to another. This is succeeded by a visit to the French part of the town. Amble through the French square as your guide takes you to the Ashram. Established nearly a century ago, the Ashram forms a major part of the heritage properties in Pondicherry. 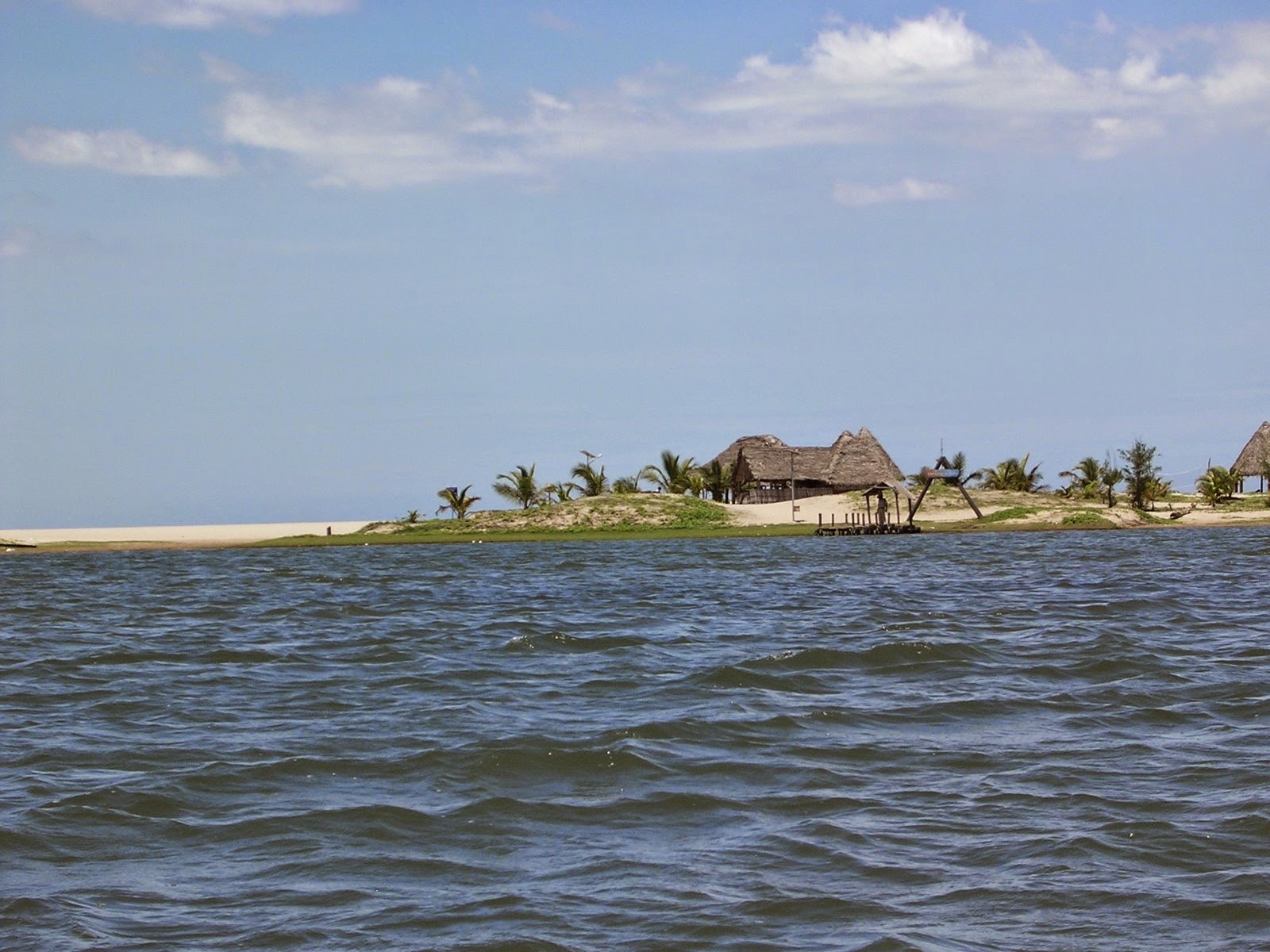 This is yet another neat and pristine beach in the suburbs of Pondicherry town. There are ample opportunities for water sports here like beach volleyball, cricket etc.

Located south of the new bus stand in Pondicherry, the botanical garden was founded in 1826 and is another example of French influence in Pondicherry. The structure of the gate makes the whole place stand out in its otherwise Tamil town location. It was originally laid out in a typical French style garden, with gravel lined paths, pruned trees and fountains. The place features many different species of exotic plants and shrubs from all around the world. The place was turned into a botanical garden in 1931 by the French botanist and horticulturist George S. Perrottet. The garden also features a musical fountain which has two shows during evenings at the weekends. 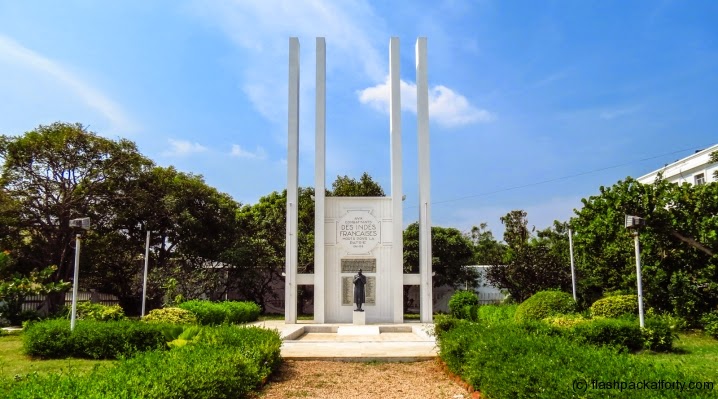 Located on the Goubert Avenue, the French war memorial was built in 1971 to commemorate the loss of the brave French soldiers during the First World War. Every year on Bastille Day (July 14th) the memorial is illuminated and pays homage to the soldiers. It is a must visit place for the tourists, especially when visited on Bastille Day as the commemoration ceremony is a marvelous sight to gander at and offers an amazingly pleasant experience.

Basilica of the Sacred Heart of Jesus 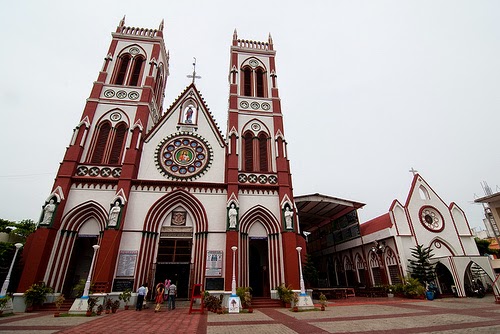 Located at the south boulevard, the Basilica of the Sacred Heart of Jesus was consecrated on December 17th, 1907. The building is a fine specimen of gothic style architecture and has become a famous pilgrimage spot for the Christians in India. The structure of this church is 50 meters long, 48 meters wide and 18 meters high and is held by 24 columns. The windows are adorned with stained glass paintings of 28 saints who were devoted to the sacred heart of Jesus. The church premise also has a grotto dedicated to our lady of Lourdes, a parish hall and an adoration chapel. The church was fully renovated and restored in 2005 giving it its current look, however only minor physical changes were made to the structure. 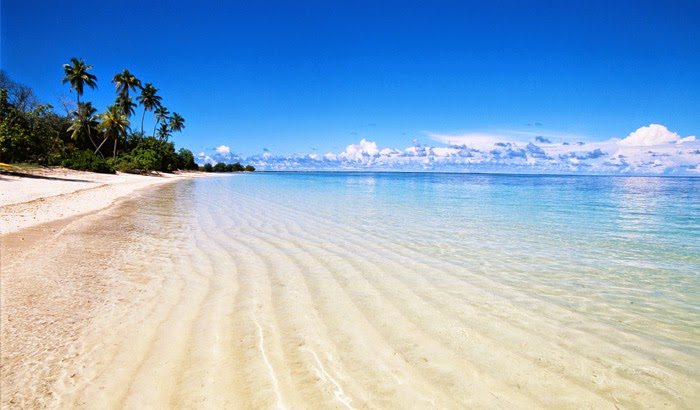 Serenity beach is a ten minute drive to the north of the town. This beach, with its serene surroundings is an ideal place to laze away your day.
Posted by Unknown at Friday, March 13, 2015